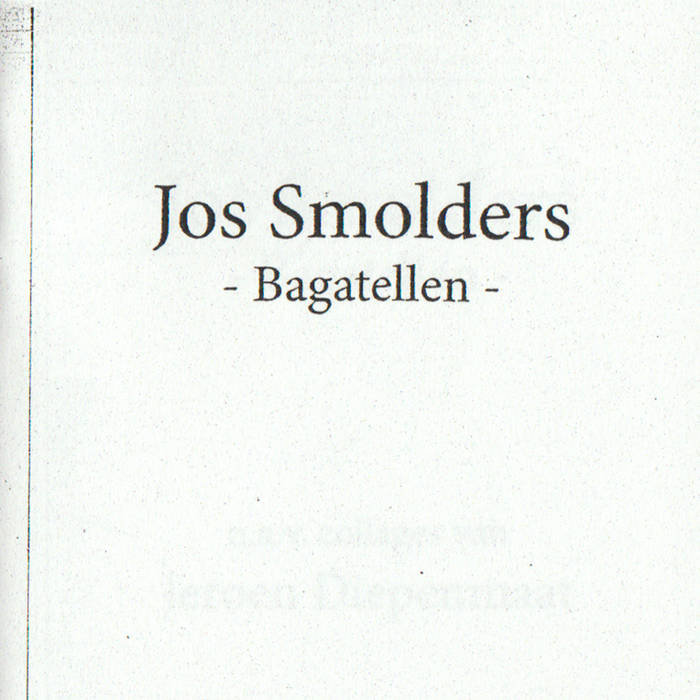 Visual arts have always been very inspirational to Jos Smolders. "I can really be knocked out by a painting, a sculpture when I first encounter it." The same happened when he first set eyes on Jeroen Diepenmaat's 'co//age co//py': black and white collaged images that are xeroxed and compiled into a booklet. Anyone with scissors and access to a xerox machine can do it. But Jeroen Diepenmaat kicks xerox art to a next level.

"So, I saw the book. Online. Ordered it. And the minute I opened it when it had arrived I felt a connection to it. I know it sounds a bit exuberant but it pulled me right in, into an experience of feeling the paper surface, smelling the ink, interacting with the images. After leafing through the book I decided that it would be an interesting experiment to translate to music that first experience, complete with the almost meditative concentration that I had just experienced."

And so, in a matter of a few - very hot summer- days Jos Smolders recorded a dozen or so small works, that each focuses on an image. Each piece starts with the turning of a page, soaking up what is presented, digesting that, and moving forward to the next page. "I use the word digesting specifically to avoid the word analysing. Analysing is cerebral and that was exactly what i tried to avoid. The object really was to avoid clear and objective thinking, rationalising. Gut feeling was given the main stage here."

Each time Jos Smolders just concentrated on the image. On the sounds already present. Questions like: what does this image dó to me? What images / experiences does it remind me of? "The saxophone came at the perfect moment. I heard my neighbour rehearse. Texted him to play 'something' somewhat louder from his window and recorded it. No overdubs. Just that." Other things needed preparation to realise, like the numbers and letters. But the execution was purely intuitive.

"I'm really glad that Jeroen and Harco agreed to release this little gem. On cassette. Not the best sound quality but exactly right. Just like the book itself. Not the best quality of image. But just right."

Jos Smolders started working with a Philips reel to reel recorder when he was 15 years old. During the early 1980s, when he was studying at the university he got exposed to Schaeffer/Henry’s Symphonie and began researching and made his first collages and recordings. From there things evolved. He has recorded countless albums and collaborations and is also a mastering engineer working mainly in the field of electronic music.

Review by Vanessa Ague in The Wire Magazine (also reviews another album by Jos Smolders):
"With Bagatellen and Submerge-Emerge, multifaceted and prolific electronic artist Jos Smolders seeks to make music inspired by other art - the humbling feeling of being stunned by an image and the vivid storytelling of a poem. Each album provides an entirely different listening experience: Bagatellen plays with sound and silence, while Submerge-Emerge traverses a rich, watery world. Both exemplify Smolders's painstaking approach to depicting his subject matter, showing how he carefully chooses the sounds that resonate most with his intended concept.

Electronic blips burst from silence like spontaneous ideas on the unnamed tracks of Bagatellen. The album takes its inspiration from the striking feeling of experiencing visual art. Smolders found himself reading Jeroen Diepenmaat's co//age co//py, a book of black and white collages, and was immediately struck by its imagery. He wanted to sonify the emotional gravity of flipping through the book's pages on Bagatellen, beginning each track on the record with prolonged silence. The music is stilted and spontaneous, made of random smooth saxophone melodies, kids yelling, crackles, gurgles and stunted piano melodies. The tracks are short, just the amount of time it takes to scan the page of a book, but they don't capture the captivation of reading a page-turner."

Review by Howard Stelzer in Vital Weekly (also reviews another album by Jos Smolders):
"Jos Smolders was inspired to write “Submerge- Emerge” by a teenage encounter with an 1897 poem called “Un Coup de des Jamais N’Abolira le Hasard” by Stephane Mallarme. As art tends to do when a receptive kid encounters it for the first time, the poem stuck with Smolders for decades afterwards. He continued to think about it, wrestling with the poem’s meaning and the effect that it had on him. In 2016, he decided to write a piece of music based on the poem. Now, writing experimental-type music based on a poem is, generally speaking, a silly thing to do. You’ve no doubt heard endless academic pretentious tape-and-voice nonsense music based on poems. Smolders, though, has long used language as inspiration for his music, and always with a uniquely personal perspective. He’s also a thoughtful enough composer to not fall into any cliché traps. “Submerge - Emerge”, then, is one of the most exciting and beautiful albums of his career, one that I’ll keep returning to long after this review is written. The album is more about the poem’s themes and ideas than simply a sonic backing to recited text. There are long stretches with no words at all… just shimmering pools of synthesizer tones, cavernous drones and field recordings of boats, beaches, and water (an element reflected from the poem’s water imagery). The album is lovely and engaging… episodes (labelled as “interludes” and “plates”, implying parts of a book) seem to comment on one another, working both individually and as a flowing whole. There’s a lot to chew on here, whether one traces sonic elements and compositional choices back to Mallarme’s poem or not.

“Bagatellen” was, like “Submerge - Emerge”, inspired by another artist’s work in a different medium. Smolders purchased Jeroen Diepenmaat’s Xerox collage art book, “co//age co//py” and was immediately taken by it. He recorded “Bagatellen” quickly as a response to the visual artworks in the book. It is, by design, more raw and immediate than the novel-esque “Submerge - Emerge”, more of a gut response than the previous album’s complex tapestry. The 12 pieces that comprise “Bagatellen” (which, according to my quick online translator, means
something trivial… but maybe the meaning is closer to “ephemeral” or “intuitive”) are mostly between two and five minutes long (one is shorter and one is longer), implying an in-the-moment reaction similar to the imperfect, fast-and-dirty quality of xerox art. But a quick take from Jos Smolders is still going to sound rich and sculpted. Several of these miniatures are sheets of percolating synthesizers, some open-window field recordings, piano minimalism and (of course) diced language. Some starkly melodic passages are situated amid beds of strange electronic environments and patient pauses. If “Submerge - Emerge” is a novel, then “Bagatellen” is a poem… sketches, reduced responses, hints and suggestions."

All music by Jos Smolders.
Cover design by Jeroen Diepenmaat.

This album is co-released by independent publishing house Hellend Vlak.