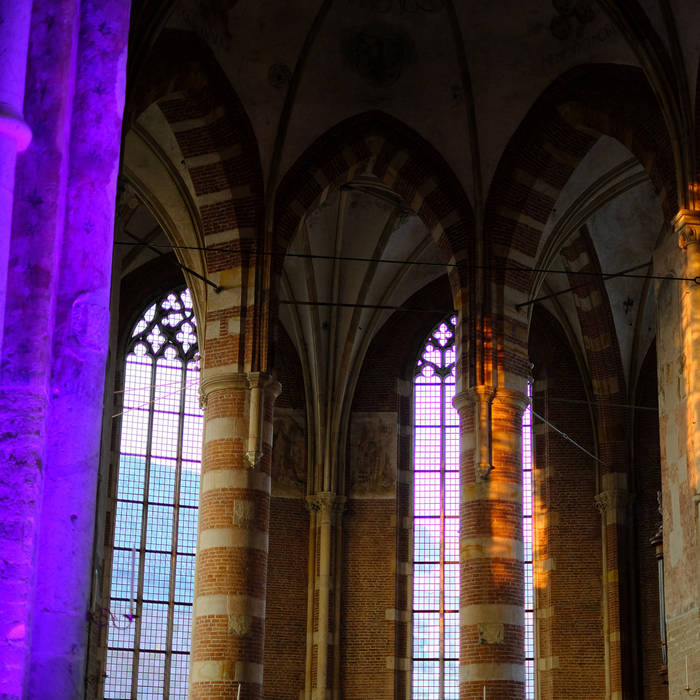 This is a recording of a live concert by Radboud Mens & Matthijs Kouw, using longstring, modular synth and church organ. Recorded on 29 May 2019 in Lebuinuskerk, Deventer, NL.

Don't forget to order postcard(s) with your free download!

Sound artists Radboud Mens and Matthijs Kouw have been working together since 2001. Over the last 5 years they have been working on minimalist compositions using longstrings and a modular synthesizer. In this live concert they also used a church organ. At first glance, nothing much seems to happen in these compositions. Listeners who immerse themselves in the music of Mens en Kouw will, however, be surprised by the rich character of the complex shifting sound layers, which lead to an intensive listening experience reminiscent of the work of composers such as La Monte Young, Eliane Radigue and Alvin Lucier.

Vondst and De Perifeer organize a series of concerts together, in the Lebuinus church. You are now listening to a recording of one of these concerts. In this series we hear and see artists that fit very well with this impressive location; in search of a contemplative and sometimes even meditative atmosphere that seamlessly connects with the cathedral space and the acoustics of this majestic location.

Review by FdW in Vital Weekly:
What may seem a gimmick is the free download by Radboud Mens and Matthijs Kouw, for which the label also printed a postcard. A great tool to get your work out there for free and still have a physical object. On May 29th of this year, these two men played at the Lebuinuskerk in the small city of Deventer and this release is, I think, the first time they release a live recording. Their previous releases were all studio recordings (see Vital Weekly 1173, 1168, 1075). They are both known for their love of all things drone-based and this one-hour work is no different. Mens and Kouw brought in a modular synth (Kouw) and a long string installation (Mens); the latter has been experimenting with these for some time now, either solo as well as part of the Staalplaat Sound System, of which he is also a member. The recording is a live recording, picked up by a pair of microphones. Maybe they used a couple of devices to do the recording, and this is the result of a mixdown. I am not sure there. Recording using microphones in a wide-open space such as a church mean that all the 'other' sounds that are produced unintentionally are also picked up. This happens here once and for me breaks the slow, tranquil mood of what is going on. Shit happens; I think is what they say. From what seems to be line hum at the start, the piece slowly starts building and sounds are added all the time, layer by layer; like peeling an onion in reverse. There is a whole of sounds around the thirty-five-minute point and then the onion is peeled off again. There is very occasionally a bit of an acoustic rattle to be heard and I assume that is Mens fiddling with something on his long strings, changing the vibrations or such. The whole piece is a constant flux, changing and shifting all the time, and a true delight for all drone heads.

Guests include Kassa Overall and Muriel Grossman, plus an LP of the week by Van Hunt.