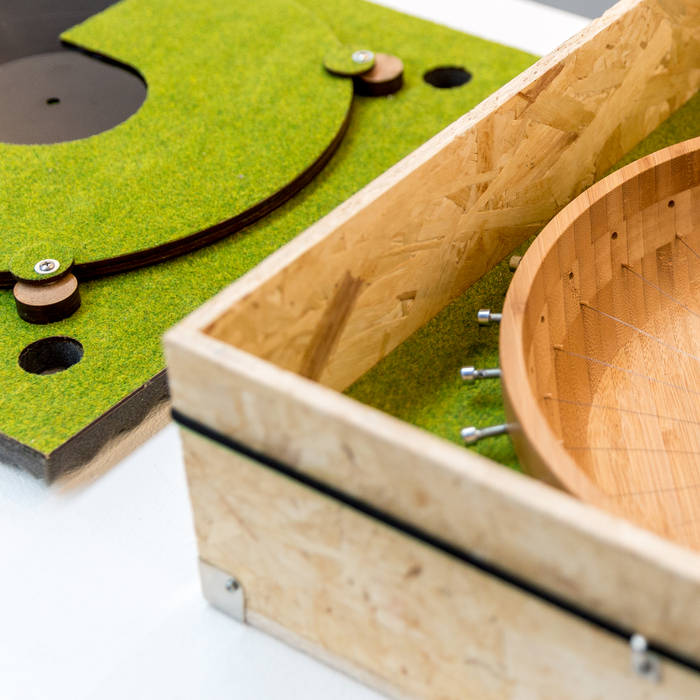 'Grass Velvet' is the title of a 360º sound-object release in the Esc.rec. Sediment series. In an edition of one. Available by contacting the label directly. The price of this one-of-a-kind-sound-art-object-instrument-release is €1900.

Eli Gras created a wooden box that contains a small electro-acoustic instrument (a 'floating bridge harp'), made in residency, with improvised materials, at De Perifeer (2015) and in Barcelona (2017). The box also contains a 12" record, with a recorded piece of music, using only the sounds of this instrument. The box is designed to hold and protect both items - record and instrument - as a vehicle, being part of the work, not just a container.

The title 'Grass Velvet', mainly refers to Gras’s idea to turn the object into a sort of landscape by adding diorama grass.

Eli Gras was invited to take part in this residency project by record label Esc.rec. and mini-venue De Perifeer. The residency was intended for her to work on a new music instrument which was to be part of a live performance ánd a limited edition release in the Sediment series. She used materials available in normal hardware and decoration stores (like a salad bowl, a sink filter, allen screws and iron wire), nothing too technological or too complex, a work of proximity. The result was a beautiful harp that allows circular playing. Extremely sensitive sounds are amplified via a contact microphone connected straight to the bridge.

Just after the instrument creation, Eli Gras performed a concert in De Perifeer, including the newly made harp in her usual music set-up, as a presentation and a first exploration of it’s sounds.

'Grass Velvet' was first presented during the Instruments Make Play festival and expo in Kunstenlab (NL).

Eli Gras is a self-taught multidisciplinary artist with a career in experimental and underground music starting in the early 80's. Nowadays her musical practice is focused on experimental improvisation and instrument making, playing concerts, giving workshops and talks. She played with many artists all around Europe and is founder and director of the NoNoLogic Festival and La Olla Expréss records.

Review by Richard Allen in A Closer Listen:
If you enjoy creative presentations, look no further than the esc.rec. label, whose latest releases are as unique as they come ~ physical editions that speak of permanence and impermanence, while providing reminders of the enduring appeal of touch. Granted, one limited edition has sold out and the other costs €1900, but that in no way diminishes their power.

Jeroen Diepenmaat‘s Tak is the (much) longer release: 8 hours as opposed to 5 minutes, although a tidy 4-hour version is available for the masses. The original edition was a USB stick embedded in a branch, a reflection of the manner of recording. These are classic slabs of vinyl played by wooden styluses, leading to degradation and lull. One of the joys of the recording for this reviewer is seeing the various speeds (16, 33, 45 and 78 rpm), which were included on my childhood record player, the upper and lower settings absent from most modern equipment. Deuter, Greek folk music, the Polish Nightingales and the Mormon Tabernacle Choir are subject to this process, which produces a strangely beautiful byproduct.

The original sources are clearest at the opening of each piece, some of which stretch over the one-hour mark. Over time, the music becomes masked, giving way to flutter and rub. The Greek folk piece takes on the somnambulant effect of a slowly moving train. One detects the recession of foreground elements and the ascension of background elements, as well as new sounds produced by abrasion. The lone 78 rpm piece is the shortest of the set, but demonstrates the swiftest movement as musical melodies become percussive melodies due to the combination of velocity and wood. Counter-themes emerge at the two-and-a-half minute mark and continue to unfold for the remainder of the track. In contrast, the 16 rpm choir piece sounds like a field recording of turtles making their way over granite slabs. The longer one listens, the more one experiences the ghost melody in the background, advancing and retreating like a fog.

While Tak blurs the line between instrument and song, Eli Gras‘ Grass Velvet contains both. The project exists as a single constructed “floating bridge harp”, constructed with materials including a salad bowl, sink filter and iron wire. If you’re thinking, “I could do this at home,” go ahead, we challenge you! The release also includes a 12? record (cut by Diepenmaat) comprised solely of sounds from this instrument. The harp has already appeared in concert, but if you buy it, the artist won’t be able to use it anymore ~ part of the reasoning behind the price.

While listening to the presentation, I’m imagining how I might use such a device. The contact mike is already included, but a second contact mike in tandem with other instruments might make for some curious echoes. The sounds produced are akin to thumb pianos, prepared pianos, rain sticks and whistles. On its own, the track sounds magical, but the length helps; in a longer format, the harp might be used to transform ambient pieces into experimental or to add texture to soundscapes. Only in the closing seconds does it sound like a harp. If you want to buy this piece, it’s free; but if you want to hear more of these unique sounds, there’s only one way to do so. The gap between the two underlines the difference between the digital and the physical. Once gone, these sounds will be gone forever, fading like the abraded grooves of Tak, present only in the memory and the imagination.

This project is financially supported by Mondriaan Fund