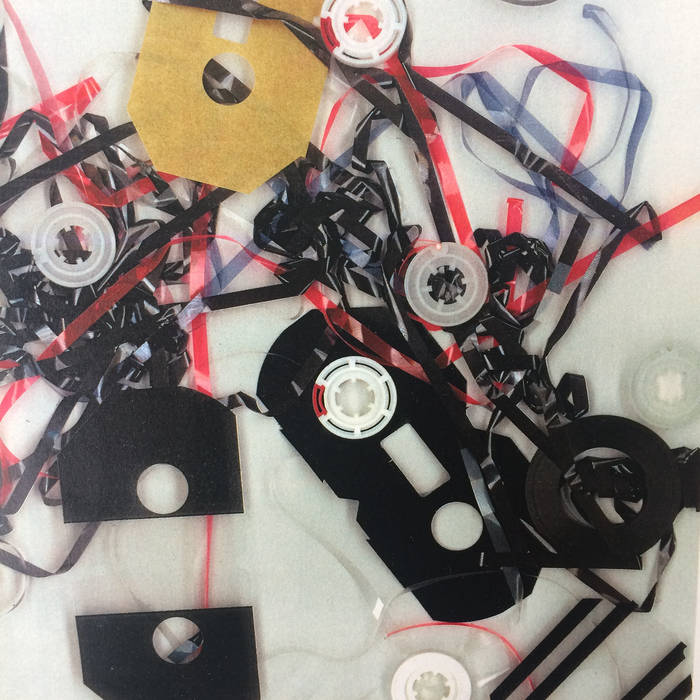 Everything that spins, will meet itself again. Improvisations around a tape recorder take you to many destinations unknown to the regular travel agencies of music. That which stumbles need not fall. We catch and we realign. When recording everything in one take, there are no errors, only intervals.

With Sluimer (Slumber), Jeroen Diepenmaat and Twan Sallaerts set out to outdo aesthetics again, which was doomed to failure from the get go.

Jeroen Diepenmaat is a visual artist with a predilection for sound, who has several other Esc.rec. releases to his name. In his work, consisting of drawings, sculptures, installations and performances, he explores the cutting edge between image and sound and the transition from one to the other.

Twan Sallaerts is a walking talking music encyclopedia with a very broad scope, an avid radio show host and producer of probably the largest heap of unreleased miscellaneous music we know of. He also recently crossed over to the visual arts.

Diepenmaat and Sallaerts have been creating and recording music together on a regular basis for many, many years now. At some point in time they were known as Jool Hul, but the majority of their collaborative work remained hidden. Until now.

Review by NR in Vital Weekly:
"There is something wonderfully lurid about Jeroen Diepenmaat and Twan Sallaerts’ new album ‘Sluimer’. Part of this is down to the idea that everything is cyclical. Especially when it comes to music. The pair begin creating improvisations around a tape recorder. Everything was recorded in one take. This gives the songs an immediacy. On a first listen you don’t know what is going to happen, or if what is happening was meant to happen.

The real thrill of ‘Sluimer’ is when Diepenmaat and Sallaerts get locked in to a groove and stay there. The duo appears to be interested in trying things out and sticking with what they like. During ‘Terloops’ there is a wonderfully warming organ that welcomes us to the song. It gives off vibes of late-night roaring fireplaces. Mugs of steaming tea or cold beers. There are also some wonderful melodies deep down in the mix, like pennies in the back of a sofa. They add to the melodic tones of the organ and help ground those pleasant vibes. Behind this feeling of comfort and contentment, there is a repeating clicking noise. At first, it's barely noticeable. As the song progresses it starts to become all-consuming until the organ fades into the warming ether and all your attention is on it. This is what ‘Sluimer’ does incredibly well. It gracefully moves your attention from one sound, or tone, to another. Without you realising it.

It has been rumoured that Diepenmaat and Sallaerts had been creating music under their own names together for years, but this is the first they have unveiled. Another rumour hints that there is plenty more where this came from. If so, let’s hope we don’t have too long to wait for the next installment."

Review by KN in Yeah I Know It Sucks:
"The unstoppable experimentalists Diepenmaat and Sallaerts have a very nice crispy release out on the always adventurous label Esc.rec. It’s overall mood is very pleasing and pleasant. The kind of material that you would love to hear when you wake up, yet doesn’t motivate you at all to get you out of bed. Instead it tells you (not by actual words!) to stay put and listen to it some more as you lay down in the ultimate relaxed morning state. It’s the kind of music that you deserve to treat yourself with.

On this very special sounding album I found some very distinct changes in style and approach, but in the grand middle of it all stands the very admirable Gongfest, which is one emotional tonal design that shimmers in all the majestic ways. This work is so breath-taking that only this one on its own would make me beg you to listen to this record. Not that I want to see you blue from being out of breath, but just because it’s stunning in its performance, how it drags us in as if the music itself is a fragile being that is alive and willing to expose itself to us… It’s beautiful.

The music is simply so serene over there, very soul driven and yet coming across so calm… To me the Gongfest is like a revelation of peace in which your own being as a listener can align to the one of these two artists. It’s the special one among all the other pleasantries. And trust me, it is surrounded from both sides by well worth ear and mood pleasers.

As Gongfest is in the middle of it all and there is evidently much more to explore, I will try to be a decent writer and tell you something how this work all seems to begin. It starts of as one that makes me feel as if I’m listening to a glowing light, the kind that gets powered by the natural sound effects of wood meeting gravel. If you don’t know what that means, you can imagine the end bit of a tree branch touching a large slow circulating raw looking grinding stone. This all being done under the bright eye of a watchful low laying sun… If that doesn’t ring any bells or is simply too hard to imagine, I suggest that you just stop reading this blurb and move onto listening to this release with your own ears. A thing you should do either way…

Still here? Hmm… Maybe I can try again explaining the music on the beginning of this release a tiny bit better and perhaps a little bit differently? Maybe you can try to imagine an old tape recorder, one that is being nice and dusty, with a tiny bit wonkiness to it, one that comes with all its defaults of beautiful crackles. They are there delivering wonderful lush warmth as organically played music on these tapes do their pretty majestic thing, caressing the ears with all the beautiful extra layers of warm dirt. It makes it all sound very homely and turn every place (that you let it roam freely in) into a safe space.

It certainly makes everything feel nice and warm inside, similarly comfortable as sitting chilled out in an calm room for the elderly in which an enormous clock is dominating the space, one to make sure you know that precious time is fading away as we relax and hear the things that our hosts had planted for us to come across and experience…But as fast time goes, we can clearly think that it’s best to fill our minutes with good sentiment of slight unconventional music, one of the kind that really is holding hands with a certain melodic sweetness that will put anyone potentially stressed, on a beautiful zen-like ease.

This record is not out there to thought provoke you, but more to get you in a peaceful mind state, in which the reasons to worry are nicely banned to the realm of non-existence and peace of mind and soul are the dominating caretaker filling up its presence. What’s not to love about that? There is no need to let your brain crack or think too much about conceptual happenings behind all this, in fact it might be one of those releases of experimental music that is suitable for a large audience of all kinds, various age groups would be putting their ears closer to the speakers when this album comes flowing out of it.

With ‘Soepel Zwiepend’, ‘Terloops’ and ‘Sluimer’ we go through the warm wealth of crisper works, the kind that simply can’t go wrong in providing warmth in the upcoming winter time. After this the album moves to Moerasruiter, which feels almost like a piece by Satie, hypnotic and nicely wrinkled with the technical wonders of beautifully foul tape-play. Followed by this is the shining middle point of the already praised Gongfest, which eventually parts ways to put K. Rankezielen in the spotlight. A repetitive hypnotising state of rhythm and relaxed electric shimmering that brings itself out like a magical spell. From a sound creator point of view I can relate so much to this work, as if the wonkiness of it all connects to the inner corners of my personal enthusiasm. From an outside point of view I believe it will put people in a headspin, colourfully circulating around in a trip of sound.
At the end there is ‘Beslagen Glazen’ which kindly keeps this trippy psychedelic minimalist vibrant vibe (a whole mouth full!) and all I can say is that I’m sure that all together this track and all the music on this album is probably just as addictive and pleasant as opium… But probably much more healthier! So wonderful that I could certainly listen to it all day on repeat…"

This album is co-released by independent publishing house Hellend Vlak