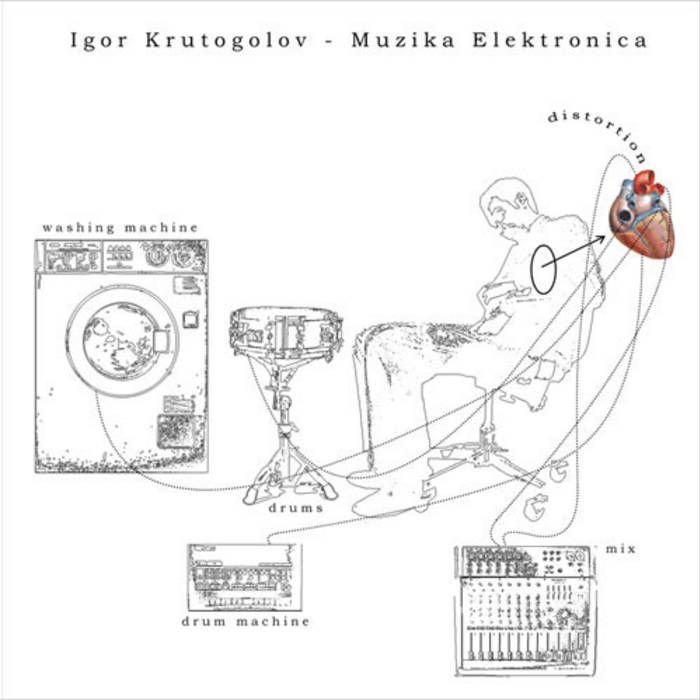 raeaw This album is so much fun to listen to. I love it. It's fantastic, trippy hip hop drum overcome with juicy distortion Favorite track: Red + Brown.

Igor Krutogolov is an experimental multi-instrumentalist and composer from Tel Aviv, Israel. He founded the Klezmer trio Kruzenshtern & Parohod and Igor Krutogolov Karate Band (a mini big band plays grind-core, black metal, rock-n-roll and tango on toy instruments). He also frequently collaborated with Chaos As Shelter, Tidal and Agnivolok as well as various other projects in genres ranging from ambient to improvisation to harsh noise.

Review by Avi Shaked for Maelstrom:

Sound conglomerates wrapped by white noise, feedbacks and scratches, are delivered in quantum doses on this new electronic/noise release by the adventurous Igor Krutogolov (Kruzenshtern & Parohod, Karate Band), who seems to explore a different ground on every new release of his. This time he does so with the help of a drum machine, a washing machine, bass, voices and drums.

The dose-manipulation here creates pulses, which are not necessarily ones that vibe through your body, but instead they dictate a rhythm that absorbs the listener and sets a comfortable, even if dissonant, ground for him to observe the developing occurrences (something that Amnon Wolman’s Sustains, which is also reviewed in this issue, largely misses). These foundations also make the exploration more noteworthy and not just chaotic as it is on the new, more organic Moha! release (also reviewed in this issue).

By the time it all starts to literally get on your nerves, the fourth track, “white,” arrives bringing an almost crystal clear ambience. In quite an expected but nonetheless vital maneuver, violent perturbations begin to threat the serenity, and even though it manages to evolve into a spin on art-rock for a brief moment, it is eventually cut brutally by another quantum of formed noise.

The fifth track, “red+brown,” returns the album to its hoarse course, and while the rest of the road continues in a similar fashion almost until the end (the eighth track, which also goes by the name “white,” does bring another breeze in, though), I have no doubt that noise addicts will appreciate this release, as it is intricate in its noise-buried subtleties, and rank it even higher than I did.

[It is a shame that this release is on CDR format, as it definitely deserves a more serious pressing. The accompanying artwork, however, is worthy of your attention as it relates thoughtfully to the music.]

Review by Patrick Mangnus in Hell Razor:
Electronic music in an underground death metal magazine? Ah yes, because I think it’s on the same distorted and dark side as death metal. The songs on this release are minimal electronic songs/ soundscapes and consists of layers of sounds so distorted you can’t recall what instrument or other objects have been abused to create these songs. They remain songs with structures, but without vocals; I think that it could have been more interesting with a bit more differences, or deranged samples even more. When you’re in for something completely different/ experimental stuff, check out the website of the label www.escrec.com where you can order many more of these strange releases.

Review by MR in Vital Weekly:
The cover design of this work is really what the CD is all about: it shows a washing machine, a drum kit, a drum computer and a mixer all connected to the heart of a person. The heart is called distortion. And distortion is certainly at the heart of Krutogolov’s music. All elements of the sound pass through the distortion, deforming all the sounds in more or less the same way and thereby creating new sounds. The music is mostly beat based, with melodic lines escaping every now and then. Krutogolov also uses a bowed bass and voice, but anyone able to discern this gets my utmost respect.

The result is basically what one would expect: a very dense sound palette with weird and sometimes eerie sounds piercing through. It may seem strange but I liked this CD most when played softly on headphones. In this way I was able to recognize best the efforts Krutogolov has made to create well balanced tracks, with breaks etc.

Unlike a first impression this music deserves full attention to discover its hidden qualities. But it must be said that a playing time of over one hour is a bit much, regarding the fact that the overall sound quality is more or less the same all the time (track number 4 excluded, but that’s just a little too less)…