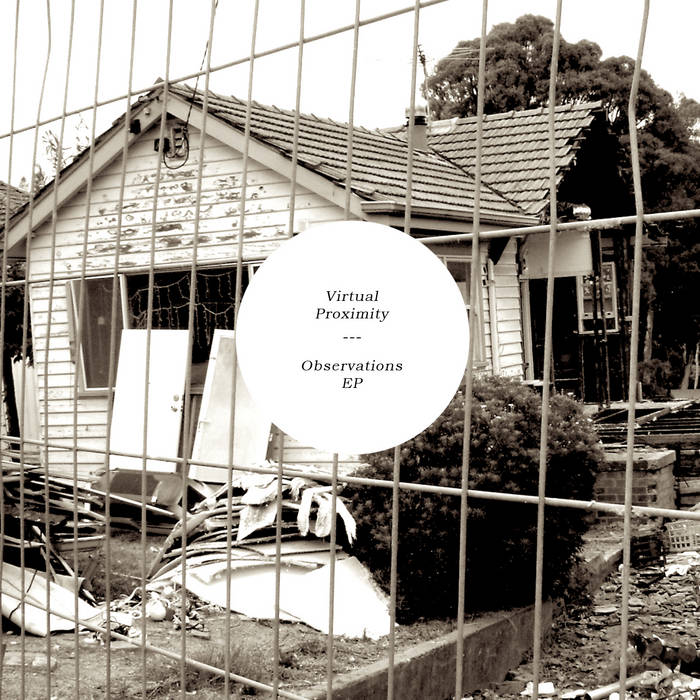 Observations on Melbourne’s sonic landscape. Rhythms and textures are drawn directly from the environment before being digitally distorted or enhanced, while live woodwinds are blended with samples, soft-synths and found sounds.

Virtual Proximity are a musical-visual outfit based in Melbourne, Australia. Their music fuses elements of techno, ambient, jazz and hiphop, with influences including Miles Davis, Actress, Flying Lotus, Four Tet and Toshinori Kondo.

Their live show is entirely improvised, with live instrumentation, digital looping and spontaneous drum programming. Abstract melodies are fused with broken beats and atmospheric textures, while the interactive visuals add an extra dimension of colour and movement, complementing the music with strange and wonderful imagery.

Review in The Music Trust by Joseph Cummins:
Weaving layers of beats with processed field recordings and lustrous strands of loops, Observations EP – by Melbourne’s Virtual Proximity – is a shimmering sonic fabric. I wish this was a full-length album as the listening experience through the six tracks was one of being enfolded in a comforting electro-acoustic lullaby.

In studio mode, Virtual Proximity is James Annesley – in live settings he plays electric saxophone, flute, EWI, live loops, and is joined by Tristan Courtney on bass, laptop, MPD, live loops and Robert Jarvis on live visuals. Not having the visuals that accompany the live performance of this music makes me think the live experience would be something to behold. Nevertheless, Observations EP succeeds in offering six (overly brief) time-slices of immersive and inviting music.

Outside Looking In opens with a plaintive flute melody underpinned by a train-track like rhythm. All is awash in swathes of textured and filtered distortion. There is nothing harsh about this buzzing static atmosphere, more a suggestion of the nocturnal trajectories of moths and lo-fi radio signals. Perhaps I get this impressive from the song titles. This tapestry gives way to highly reverberant sampled voices, which also feature on March of the Inevitable. Both tracks evoke a sense of melancholic beauty, and there is a natural flow between rougher and calmer waters across the terrain of the EP.

The use of the field recordings creates a sense of exterior space, and, when combined with rhythmic elements drawn from hip-hop and related electronic genres, give a distinctly urban, inner city feeling.

A saxophone melody haunts the upper reaches of Solitude of Outdoors At Night. The track features more driving beats than elsewhere on the EP, and the origin of the field recordings is harder to imagine. It’s easy to hear the influence of the jazz/electro/hip hop artists on Observation EP, with Jneiro Jarel’s similarly tempered (and tempo-ed) music springing to mind as a sounding board. It’s also hard not to think of trumpeter Jon Hassell’s ‘Third Stream’ music, which shares the textural density often apparent here. Miles Davis’s late 1960s fusion albums also spring to mind, although I appreciated the lack of ‘solos’ here, or of much overtly melodic playing, as this focused attention on the deeply textural and almost baroque detail of the material. Mentioning the shared resonances with these artists places Virtual Proximity in vaunted company.

While Observations points towards the relative temporal freedoms offered by live performance, the recorded format can nevertheless support itself with the beauty of its dappled rhythmic shading and spatial suggestion.

Review by Chris Downton in Cyclic Defrost:
Comprised of musicians James Annesley and Tristan Courtney alongside visual artist Robert Jarvis, Melbourne-based musical-visual outfit Virtual Proximity perform entirely improvised live shows, with live horn and woodwind instrumentation being processed and combined alongside loops, found sounds and drum programming to conjure an eerie sense of downbeat post-jazz atmosphere. It’s Annesley alone though who is responsible for producing the collective’s recorded releases, and this debut download-only EP ‘Observations’ offers up six tracks that remain difficult to pin down, and hover somewhere in the indefinable space between musique concrete, ambient, post-jazz and hiphop.

‘Outside Looking In’ kicks things off with a forlorn wander throughout gentle looped horns and woodwinds, as the distant clatter of drums lurches along through a gauze of field recorded sounds, a muffled conversation remaining just out of earshot as insect-like tones ripple through the mix like a fog. If there are traces of the weary landscapes crafted by Actress on his ‘Ghettoville’ collection on the aforementioned track, ‘Inside Looking Out’ gets far more cold and brittle as crackling textures and looped bells cycle against moody bassoon swells and distant zapping electronics, before ‘Broken Machinery’ ushers in a queasy crawl through lurching mechanistic rhythms, doomy tribal bass and arcane-sounding synth trails that calls to mind the likes of Coil or perhaps Hacker Farm more than anything else, particularly when things slow to a sickening crawl and what sounds like a TV sample gets mashed all over the place. An intriguing and frequently dark EP that’s difficult to pigeonhole.