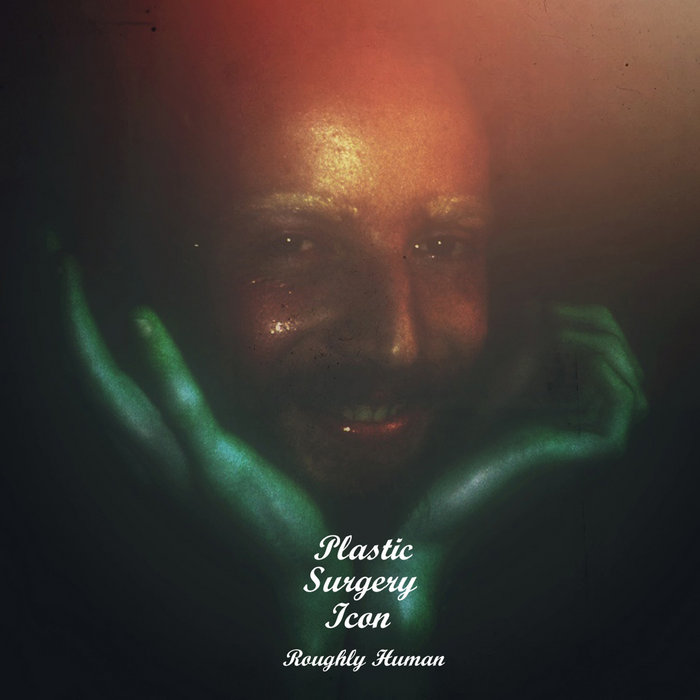 Roughly Human is the title of the debut album by Plastic Surgery Icon, for which he spent the last three months of 2012 recording non-stop. The idea was initially to record some basic acoustic guitar songs that he had lying around for years, maybe for the release of a short EP, but additional new songs appeared quickly. To three of the four old songs, vocals were added, along with other instruments. Three of the new songs were more math rock oriented. In the end there was an album's worth of material that turned out mostly acoustic, but stylistically varying between folky singer/songwriter pieces, some catchy pop tunes and gradually escalating mathy madness.

Influences include Sun Kil Moon, Deerhoof, Super Adventure Club, Animal Collective, Spoelstra, Lisa, Amy en Shelley, hipster haircuts, cats and internet messageboard spambots. Since the iconic ambassador of plastic surgery only had knowledge of a computer programme that hadn't been updated since 2002 he decided to use that. After recording, he got in contact with Greg Saunier of Deerhoof fame, who was friendly enough to master it and make it sound vivid and punchy. Plastic Surgery Icon used to play in Dutch noise rock band Boutros Bubba and still plays in Amsterdam based garage band Apneu.

Review by KN for Yeah I Know It Sucks:
The first track on the Plastic Surgery Icon is ‘I Sleep Badly With You Alive’. The strings of an acoustic guitar are played to create a path between dreams and reality. If the staring face on the cover of this free release wasn’t so imprinted on my visual cortex of the mind, I would probably be free to close my eyes and dream away about dusty roads, driving through nostalgic landscapes, inhaling the beautiful sad tones of falling leaves and sniffing the fresh vapors of the green grass of home. I have to admit, half way this wonderful track, the red face and the green hands of Plastic Surgery Icon has faded quickly down the memory hole.

With ‘Ex Insomniac’ the music is getting more wild, as if we have arrived at the exciting part of the dream-state. From a soft begin with a fine duet of squeaking human made noises and the stretched strings of the pretty guitar, until the most enjoyable transitions to a soulful one man punk band! The baseline, the craziness in-between it, the humping beat that lurks around and the plain funkiness that fills the air with the smell of liquors is just plain excellent!

‘Remember When You Had Alzheimer’ is a fun and menacing song that makes me feel all freaky inside. It rocks, it scares, it thoroughly entertains! Enjoyable guitar works that deserves to be injected in your funky veins for the ultimate wonky dance moves. The vocal presence of Plastic Surgery Icon are like a sarcastic wonderful little instrument!

This record is flying away in such a rapid speed. Track 4 is a sweet one called ‘Hate Preacher’, which captures the artist singing sincerely while playing the guitar as a virtuoso. A recording that digs deep in the listeners soul while you are simply not expecting it. A wonderful ending that warms up the heart is included for the best enjoyment.

This (till now) excellent album continues with ‘Noise Rock Paralympics’. We hear a prominent soulful trumpet in the beginning, and from there it all turns into a wicked sounding jam of a seemingly tight but wonky played drumkit. Wicked base playing that feeds up the wickedness of the guitar expressions that your ears can witness over here. The trumpet makes a reappearance and the ending is utterly weird as well as incredible original and great!

‘Hope You And Your Haircut Fucking Die’ is just plain incredible! Something you have never heard before, made with great skills of musicianship and class, utterly great, absurd and manages to be incredibly pretty too!

The 7th song of this wicked album is ‘Woman of Britain’. It feels like a pretty ballad, highly original, pretty vocals and energetic folkish played music that smells of perfume in the night, a romance in the air, and a poetic heart.

Sadly ‘Voler Ine Guitare Du Dessin De Tinka’ is the last wonder available on this free downloadable Roughly Human release. This is certainly not a tune to be overlooked as it just reminds you how wonderful and playful this complete record is. So much beautiful notes are being played on the guitar that changes visions of guitar-based music forever. No jokes, this album is a must have for anyone who is a respectable enjoyer of original humanoids interacting with acoustic & electric guitar, bass, a voice and a floor tom!