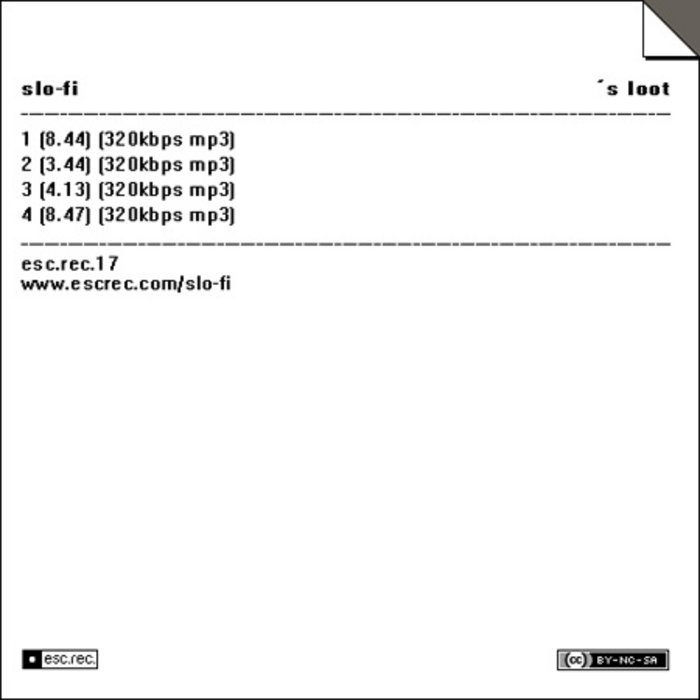 Review by Jos Smolders for Earlabs:
Slo-fi is Roel Meelkop. Roel Meelkop is also part of Goem, of Zébra, of Kapotte Muziek, was once part of the legendary THU20 and is of course the man behind a trail of cd releases of strong, abstract electronic music released under his real name. When I contacted him about this release he told me that the music on this release is actually a follow up to his version of Goem, which was released by Small Voices with the title ‘Robbed’. Robbed was a collage of samples that were derived from one single album. The same album was used here and Roel added his own material. I really don’t know what album that is and I don’t want to know either. At times it sounds very much like Cabaret Voltaire in the period of “The Covenant, The Sword And The Arm Of The Lord”. Patterns, arpeggios, sequencers but all analogue. All of the music was (re)constructed in Audiomulch.

Listening to this stuff you have to make a choice. One direction of thought is that this is rubbish because no dance music or badly produced dance music. Slofi’s first release (slo-fi’s latest hits) was a rather straightforward study into the area of dance / post-acid or such something. A release that pushed me into that train of thought. This release is not so easy. Yes, rhythm plays a very important part, the tempo is somewhere between 120 and 130 bpm. But what happens on top of that is quite something else.

Where the first slo-fi concentrated very much on the rhythm and Meelkop stuck to classic acid language here he is much more on the loose with strange melodic patterns. It’s loopy, loop based without the feeling that he’s just spinning samples. Really adventurous stuff as far as the dancefloor is concerned. Other reviewers bemoan the fact that this is an online release and not a ‘proper’ physical release. I don’t see that at all. This digital release serves a perfect crowd and the sound quality is fine. I don’t think that a vinyl or a cd release would have reached a bigger and/or a different audience. But now were reaching a different topic that deserves discussion, but elsewhere.

Review by FdW in Vital Weekly:
Deventer’s (that is in The Netherlands) Esc Rec closes the year, or perhaps starts up with three free MP3 releases, two of which are by artists whom we know from before and a new one. [...]

The final MP3 by Esc Rec (for the moment), is by slo-fi, the techno project of one Roel Meelkop, who in another life is known as Roel Meelkop, the serious composer of microsound, silence and such like. But rhythmical always had a strong interest to him. See his involvement with Goem, with Zebra and solo as slo-fi. The project that is probably the easiest to access is also the project that brought him the least fame. He has two old 12" releases on Audio.NL, one of Antenne Records and some CDR release, and here four tracks that could have been a great 12". But it hasn’t been. If that is a great pity is not for me to tell: I am not a DJ of any kind, so the medium in which things take shape is always of least interest to me. But I can imagine that this would sound really fine on 12", when cut right, and that a fine DJ would spin this in front of a dancing crowd. That would in a world of justice, but there is no such world. I think slo-fi makes great dance music, even for those who hardly move their feet, like me. It’s a pity that this side of Meelkop’s career never took off and he is not ranked as important as he is in that area. Shame shame. But now you can take it for free and see what you missed.

All music by slo-fi
Design by Harco Rutgers