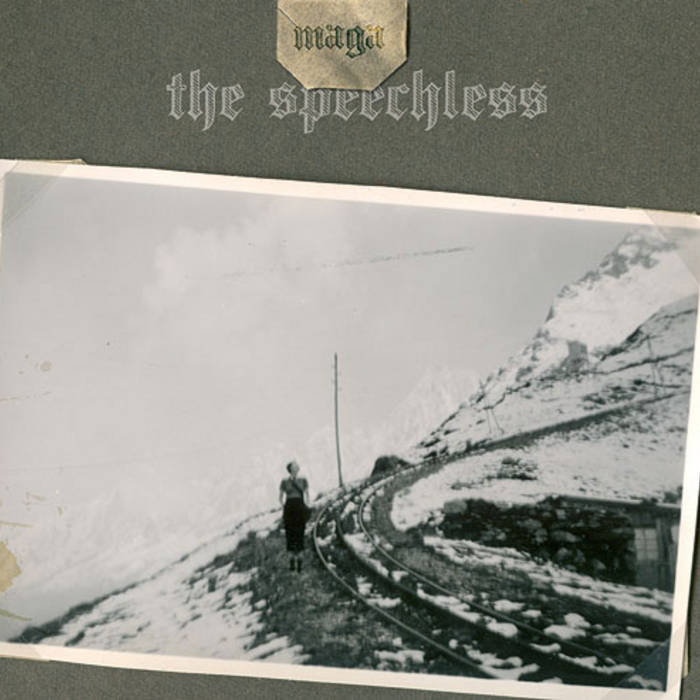 ‘The Speechless’ is MAGA’s third album on esc.rec. already. He sure is on the roll… Sounds are more four to the floor and most of it is certainly as raw as some of the tracks on ‘My Mind Machine’. The opening track seems like a clear reference to MAGA’s hearing damage, which prevents him from working with sound for long periods of time on end. A nasty disability indeed for a passionate musician like Marc. The other tracks are also quite dark in a way, but that feeling mostly gets overpowered by the urge to start moving to the ever present groove. The tracks are roaring and growling on acid from time to time and aimed straight at your less delicate motor skills. Ofcourse this doesn’t mean that the beats have lost their delicacy aswell. Just like on his first two albums MAGA’s drumming skills are never far away.

Review by KN in Yeah I Know It Sucks:
The Speechless begins with an appearance of ‘Evil Throat & Sine Damage’ which sounds title wise a bit like the names of a murderous duo. Music wise this couple of unshaven killers is greatly removed from the visual parts of the brain thanks to the audio content created by Maga. Maga is a more gentle sounding electronica artist from the Netherlands that might supply the occasional killer beats, but is (so far, so good) not out there to slaughter and is definitely not a criminal duo of any kind.

As a music track ‘Evil Throat & Sine Damage’ does perhaps have a slight noise feeling to it, but don’t expect a Merzbow to pop up and blow your brains out; it’s much more of a gentle kind. It’s a bit like a feather with some rough thorns, a love child between a rose and a bird. Perhaps it isn’t even noise, but fits much better in the alternative corners of music.

To put it under the flag of evil and damaging simply plays tricks on the mind, creating it into something that isn’t really what it is. But there is a sinus tonal exposure that is quite high, but not high enough to get problems with the patent owner of the legendary dog whistle.

This turns out to be a hint of melody, a warm expression that asks to be heard with time on your hands and a expendable mind for professional adornment. Only with this approach the image of noised up killers will be cremated to never ever surface again. The image that is left over is one of a sleeping beauty (which explains the earlier conceived view of thorns), the music that decorates this fairytale moment in which an unexpected prince has to awaken the EP with a kiss of love.

The tension is high, higher than the dog whistle could sound. The prince could be heard talking to himself as if he is talking the situation over.

The kiss never happens, but the release goes to the next track without any troubling troubles. The track title might suggest again something sinister, but in this case ‘Screamers’ probably refers to screaming of enthusiasm. A scream that all worldwide listeners of this release by Maga should do, for the experience, respect and also because it just adds an extra to the experience.

This is rhythmic dance material, minimal in some ways, but not the minimal that you see in the hipster dictionary. It’s speedy, contains finger snaps, toms and a bombastic kind of funky crunchy crust that would be ideal for a Dutch tribe to show off their ritual dancing outfits made out of tulips in their local forest. Long live the rhythm god; Maga!

And then the release brings the ‘sound of su’ which is a rather funky sound captured between a rhythmic expression of elements and rolling programmed drums. The structure of this work has the benefits of a dance track but the flair of something that prospers more in the alternative corner. No tulip dresses needed, just a good mood and a sense of rhythm.

The powerful stomper named the ‘pow pow drive’ is the ultimate push to get those feet jumping and arms swinging. This is the track in which you can hear that Maga is not just an electronic producer but also a expert groove maker. If ‘pow pow’ don’t get you in the mood for active ‘wow wow’ body movements, than you must be bed ridden or have another kind of unfortunate disability. This speedy uptempo beat work is brought in combination with a high calming fluff sound that gives it all a nice trippy feeling.

Now to spice things up and a level further Maga brought in some contagious acid wobble. This in combination with the rhythmic power grooves is certainly a Nobel winner in the dance category. A dirty voice is coming through at certain places, keeping the dancing wobbling toes something to hold on too. When he doesn’t come any more; it’s like reaching a personal lift off by excessive dancing.

Then it’s time to place the ‘Dreamers Ball’ of Maga in the ears and use it as a bouncy skippy ball into the dreamy future. A future that after the right amount of ‘skippy ball skipping’ becomes like a computer game in which it is advisable to shake your bum while deep bells do their thing in the background. This track is what my skipped out brain would simply call: DELICIOUS!

The release and Maga seems to me unstoppable in delivering quality joy that mostly gets formed by irresistible rhythmic grooves that are enthusiastic and with a good sense of humor. The architectural ‘busted harmonix’ is one of those ultimate tracks of fun that you don’t hear every day. It has the hidden harmonics shining through like a rattling organ of a long forgotten time all pumped up ready for a bright and slightly insane warm welcoming presence.

This is the now and it’s made to create a dancing party in any location that you are enjoying these mega Maga tunes in. The underline that Maga makes these tunes not only for himself but also for us happy listeners; he brings his last track on the album, which is one last ride of pure fun in the uptempo groove department. It’s like experimental techno but then without the normal sides of seriousness and snobbery. This is pure joy, and ‘keep ‘them’ happy’ needs to be played forever as when it stops and the release comes to an halt; you simply feel like you are missing it in an instant! Maga’s good grooves and happy party vibes with experimental boosts are certainly a lot of fun. Better check this release out (the cd is sold out, but digital copies are still available).

Review by FdW in Vital Weekly (www.vitalweekly.net):
With ‘The Speechless’ Maga offers his third release for Esc.Rec. Originally Marc Fien, the man behind Maga, was a drummer for various bands playing all sorts of music. But solo he plays around with electronics, acid and techno to be more precise. He does a really fine job at that actually. Raw and intense the beats thunder around in a straight four to the floor fashion, with fat synths bubbling underneath. Dark, intense but sure to be a good spin at your underground party. Great stuff.